<back to main page>

Blue and red, fuchsia and pink swished around and about in the hall. The colourful ribbons were making a statement, one that says 'I have no care in the world.' They could up and go and settle at will as much as they wanted, wherever the wind took them. Only their aider and abettor, in this case, was the artificial air emitted by the air-conditioning system.

Falcon kept her gaze on the long shiny materials, getting cross-eyed from watching the display, wishing she could join in their freestyle performance. Her concentration was interrupted when Kenzo waltzed into the hall. His suit tailored stuck to his frame to perfection. He was the groom tomorrow, an old flame of hers who decided that their friendship wasn't worth the definition of the word. Backing out of their high school graduation party at the last minute, literally, and leaving her to attend the event with her grumpy older brother, Lawrence, at the insistence of their dad. Falcon swore at the time never to have anything to do with him again, not that there was anything serious between them if the few stolen kisses they shared a number of times could qualify as unserious. Then three years later, their paths crossed again, this time in the university, and even though she had promised never to get involved with him ever again, she found herself falling for his boyish charms all over again. And history enjoyed the pleasure of repeating itself at her expense, although this time around, he had the decency to inform her he was in love with someone else.

read the rest of Chinenye's story in our collection buy it in print or ebook format from our shop or from Amazon, Createpace and Smashwords

back to main page 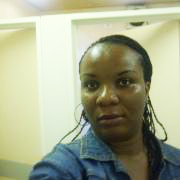 I am a prolific writer who considers herself a storyteller. I write both novels and short stories. I have just completed my first full length novel manuscript and have written dozens of short stories. I'm currently compiling my short stories into a collection for publication. My stories are centred around Africa and Africans living at home and in the diaspora.

I won the Africa Book Club Short Story Competition for the month of November 2013 for my short story titled 'Glass House'. http://www.africabookclub.com have a degree in Public Administration and will be commencing studies towards a post graduate in Creative Writing in Jan. I live in Johannesburg with my family.

What inspired you to write your story?

When I first saw the brief for My Holiday Shorts submission I quickly wrote a story that I thought fit the brief (no heavy or sad theme) but after I missed the first deadline I read the instructions again and realised that the story I had written didn't fit the requirements at all... Lol. I was sitting in my favourite book store at the time and I did the first thing that came to my mind. I closed my eyes I visualised myself flying in the air around the room, aided by the air emitted by the cooling systems in the room... In that space of 'airiness' and 'freedom' so to speak, I felt like a bird and the word falcon began floating around in my head... Before long the air began to form words which began to form into a story... So, let's just say 'Chronicles of a Falcon Heart' was inspired by a strong desire of a caged bird to be free to soar again.

This is a difficult one. I love reading and read across a vast genre of books. So to be asked to choose a favourite book will be akin to asking to pick a favourite child out of my four kids... Lol!

In my younger years I read almost everything Enid Blyton put out and a number of Mills & Boons(who didn't?). Lol. But as I grew up I would say that I've have read books that have changed my life so to speak by shaping and molding my life philosophies and principles, and have inspired my writing and gift of story telling and these include amongst many 'Things fall Apart' by Chinua Achebe, 'The Joys of Motherhood' and 'Second Class Citizen' by Buchi Emecheta, 'Jagua Nana's Daughter' by Cyprian Ekwensi, a number of Wole Soyinka's plays as well as Ken Saro-Wiwa's books which I read in junior high. For a light relaxing read though I enjoy and have read quite a number of Danielle Steele's works, a good number of Christian fiction by Francine Rivers, and finally John Grisham's books tend to jolt me right up to pay attention. So, no favourites there, I'm a book addict.

How much of your work reflects your life?

Not much. I write through inspiration not personal experiences. But societal ills and Africa's challenges and the many sufferings of Africans tend to be highlighted more and more in many of my works. But I enjoy writing a heart-warming, fun yet message-filled story such as 'Chronicles...' from time to time and have written many non 'heavy-themed' stories since then.

If you were to write a book about your life, what would the title be?

Those two words are animals that best describe me...Lol.

back to main page

Click on the short story titles below to learn more about our writers and read an excerpt of each story.

Her Name was Georgie by Sasha Ross

Chronicles of a Falcon Heart by Chinenye Emezie-Egwuonwu

The Suit by Ilze Hugo